What SkyWin really is

SkyWin® is the ultimate system for administrating skydiving at clubs or drop zones. SkyWin® makes it easy for administrators, jumpers as well as pilots to practice skydiving. It is easy to make reports of both the jumps, transactions on jump accounts and statistics.

SkyWin consists of these components, all included in the package

The youngest child in this family, a web based component that eventually will replace all the other parts below. Check our release notes for details.

One part that is delivered already from the beginning is the "Jump queue", an equivalent to SkyWish (below) which makes it easy for jumpers to manifest themselves. 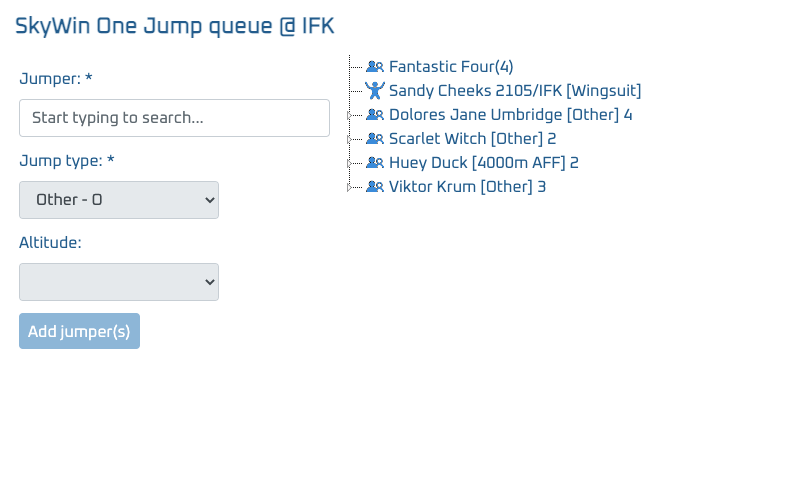 Another part already working in the first version is "SkyView", replacing the old SkyView (below) - a load monitor showing upcoming loads and the manifested jumpers and groups.

This is (still) the main component where you can administer members, groups, air planes, jumps, monetary transactions and all other related information for skydiving.

It can only be run on Windows computers, and that is one of the main reasons that we will replace it with SkyWin® One.

Use SkyWin® One instead.
In SkyWish jumpers, or group of jumpers, can manifest themselves.

Use SkyWin® One instead.
A load monitor showing upcoming loads and the jumpers manifested in them.

The smallest part of SkyWin® which is a utility for the manifest administrator, showing loads and which calls that have been announced.

Already a customer using SkyWin?
Create an account to handle your license here.